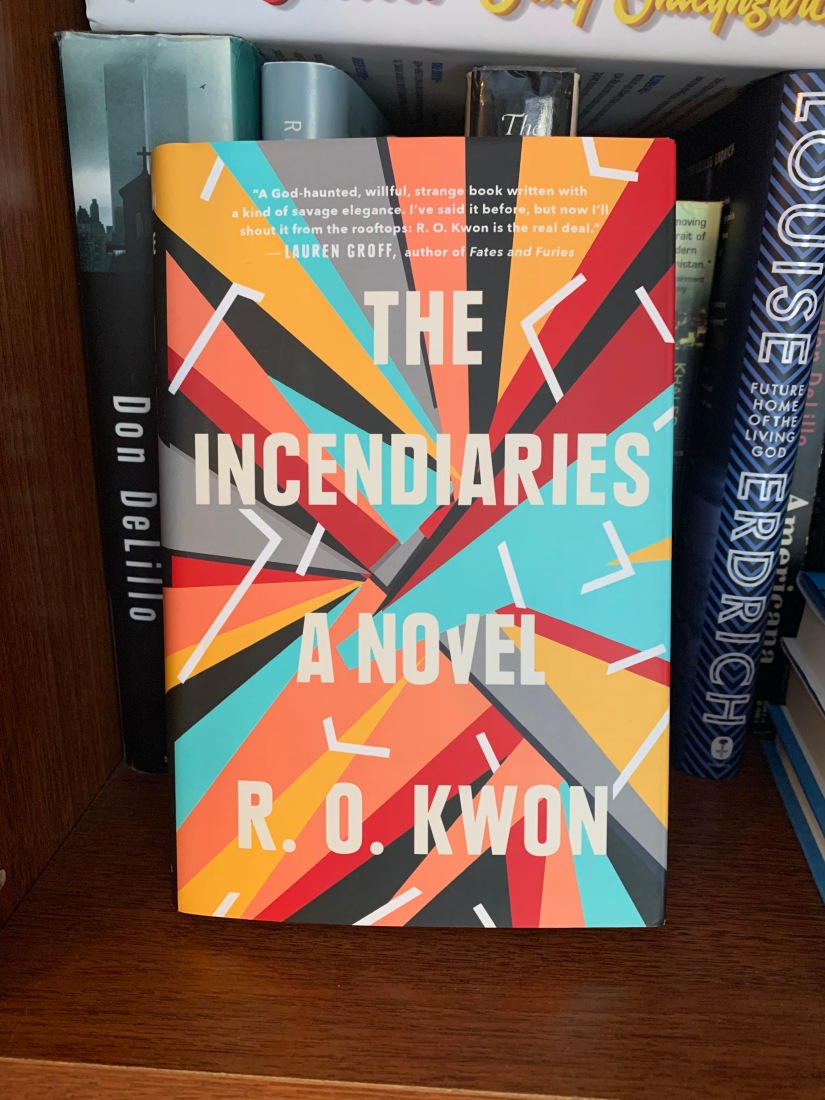 We know from the first chapter of R.O. Kwon’s intriguing debut novel THE INCENDIARIES that something horrible has happened. “Buildings fell. People died. You once told me I hadn’t even tried to understand. So, here I am, trying.” The title of the book foreshadows an act of religious terrorism. The literal definition of an incendiary is that of an arsonist—a criminal who sets fire to property. Like the biases from the story’s narrator, much in this novel can be extrapolated from that definition.

The chapters, like the novel itself, are short and told from three alternating POVs: a troubled young man from a broken home named Will, his girlfriend Phoebe, and the charismatic young man they meet named John Leal. At first, we assume the narrator of each chapter is the POV character, but by the fourth chapter we realize that Will tells this story with all his misperceptions and faulty memories.

Will attends the elite college of Edwards in the fictional town of Noxhurst. A lapsed evangelical who regrets converting his own mother to the faith, he is so embarrassed to be amidst such ivy-league wealth that he creates a fictional personal history where his family is intact and blessed with abundance. “I started reciting the lies I’d been telling since the first day in Noxhurst, the half-truths ballooning until, in moments, I turned into a different Will again.”

The first notion that Will is telling his own version of events is halfway through the fourth chapter when he pauses while narrating Phoebe’s chapter and says, “But I’m wondering if that can be right . . .” Later, he wonders if his recollection “could be grief’s narrowed vision: I’ve noticed what I’ve lacked.” His grief skews his memory as he relates the story.

Phoebe grew up a piano prodigy but snubs her mother’s plan for her to study at a conservatory. While driving home from a concert, she begins crying and swerves into oncoming traffic, killing her mother. Self-destructive behavior follows, until Will introduces her to John Leal, who becomes both her savior and her destroyer, channeling her self-destructive behavior into an act of terrorism.

The character with the least POV pages, John Leal, feels both genuine and a fraud. Will is desperate to believe what the man preaches, but knows that the deep religious truths the man espouses are empty. “Of all people, I should have recognized this warmth for what it was: a bag of tricks.”

Will’s personal bias against the other characters cannot be discounted. Though the book is laid out as alternating chapters between three POVs, Will is the narrator, as well as the main POV character. His interpretation of events, as well as his speculation on events for which he wasn’t even present, leave us with Will’s version of the truth from which we deduce our own.

As the story progresses, we learn not only is Will not an ideal and unbiased narrator, he may, in truth, be an asshole. As their relationship collapses, Will rapes Phoebe, though since the details are presented through Will’s skewed recollections, he doesn’t consider his actions inappropriate, though he does admit, “I’d found it satisfying: I enjoyed frightening the girl I loved.” It isn’t until the novel’s end when Phoebe’s best friend Julian tells him, “I know what you are, Will,” that he even sees his actions in this harsh of a light, forcing us to reexamine the incident and question our own biased interpretation of the scene. Will becomes the incendiary of the novel’s title. Julian tells him that he’d “given Phoebe the last push” into John Leal’s cult.

Like many great novels, the idea of an incendiary and its definitions as both a noun and an adjective caused me to read the book again, this time from the point of view of Will’s misperceptions of his own actions and their consequences. The novel becomes its own incendiary, making us uncomfortable with Will as a sympathetic character, forcing us to reexamine our own misperceptions of Will as a rapist, and I wonder what implications that misperception might have on how we view others, or in fact, on how we view society itself. Beyond an “examination of the minds of extremist terrorists”—as the book’s cover suggests—I wonder if this was Kwon’s intent.

Joshua Loveday lives in Michigan with his spouse and three dogs. He has published articles in Detroit Metropolitan Woman, the Michigan Chronicle and the Engraver's Journal. His story THE BEACH was a finalist for the 42nd Flash Fiction Contest by New Millennium Writings, and his story IN THIS LIFE appeared in Grit Magazine. He also wrote regular features for Michigan Tourist Monthly for more than a decade. When not writing, he walks his dogs, pretends to be a chef and pompously drinks black coffee. He is currently querying agents to represent his latest literary novel in which a terminally-ill man in an absurd Midwestern town attempts to change Trump-era narratives by initiating a black swan event. View all posts by Joshua Loveday