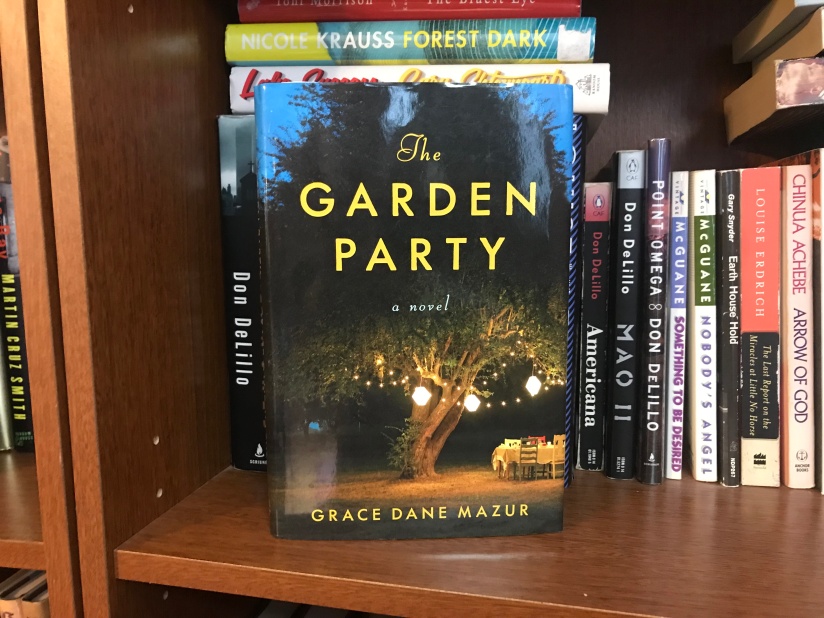 I was unaware of the comparisons of THE GARDEN PARTY by Grace Dane Mazur to Virginia Woolf when I first began reading it, but Mazur’s use of omniscient third-person POV and the story’s time frame—the entire novel takes place in one evening—brought Woolf’s MRS. DALLOWAY immediately to mind. So much so that I fruitlessly scoured my bookshelves for a copy I hadn’t read since college, ultimately checking it out of the library to compare it to Mazur’s novel.

The story opens and closes with Leah Cohen, the aging matriarch of an eccentric family. Her son Pindar and his wife Celia host an engagement party for their son Adam and his fiancé Elizabeth, whose family—the Barlows—reluctantly attend the party in the garden behind the Cohen family home. At times, the novel’s many subplots make it appear more like a collection of vignettes than a comprehensive book, but they support a larger plot to which many of us can relate—the clash between two very different families that act civil for the sake of their marrying children. Mazur writes: “The emotional fields hovering among the guests—these stood out for her [Celia] like strands of colored smoke . . . all the other psychic currents . . . glowing as though they were external neurons, which . . . one could untangle and weave into a narrative of emotions.”

Mazur often inserts anthropomorphism into the story—the first three parts of the book open with it—and the setting becomes another character with its own POV: “The stairs in the front hall creak as oaken floorboards talk to nails . . . Couches exhale. In the attic, objects made of suede and velvet stir. Forgotten horsehair mattresses sigh and wonder.” Mazur adeptly switches verb tense from past to present when personifying the setting, reinforcing the motif of time as an additional aspect of the setting, along with the house, garden and pond. The pond itself becomes a portal to another world—the permeable dimension of time—for both the children at the party and Leah at the story’s end.

This theme of time is intricately explored throughout the book and often foreshadows its unraveling during Leah’s Woolf-esque stream-of-consciousness: “Time had become all jiggery around the edges . . . [It] was darting about, sizzling and unruly, flicking from one person’s story to another’s.” Even Pindar dwells on the subject: “The question of time had been with him for years . . . but why did it suddenly feel so catastrophic?”

The fifth and final part of the novel is all about Leah and her life’s closure. The garden pond becomes “one of those hinges of being, letting her swim back through her past.” The image of the anthropomorphic tablecloth at the story’s open is referenced, once again switching to the present tense: “Suddenly, the evening flutters madly, billowing like a length of white linen.” For Leah, “Time had ceased quivering and coiling back on itself. It had become taut and resonant and she was enfolded in its infinite smoothness.”

Mazur’s subtle foreshadowing, her poetic imagery and flowing motifs forced me to read the book again, which I gladly did. At times the omniscient narrator and the large cast of characters feels overwhelming, and I often consulted the seating arrangement chart Mazur included at the beginning of the book, ostensibly written by Celia and including her own biased thoughts about the guests.

You get what you give with this novel. It can remain a quick and easy beach read while on vacation or a complex and well-thought-out narrative with rich characters and a deep finish. Though the stream-of-consciousness scene and abrupt ending can leave one with a longing for a more traditional denouement, fans of both Virginia Woolf and postmodern literature will like this novel. I highly recommend it.

Joshua Loveday lives in Michigan with his spouse and three dogs. He has published articles in Detroit Metropolitan Woman, the Michigan Chronicle and the Engraver's Journal. His story THE BEACH was a finalist for the 42nd Flash Fiction Contest by New Millennium Writings, and his story IN THIS LIFE appeared in Grit Magazine. He also wrote regular features for Michigan Tourist Monthly for more than a decade. When not writing, he walks his dogs, pretends to be a chef and pompously drinks black coffee. He is currently querying agents to represent his latest literary novel in which a terminally-ill man in an absurd Midwestern town attempts to change Trump-era narratives by initiating a black swan event. View all posts by Joshua Loveday